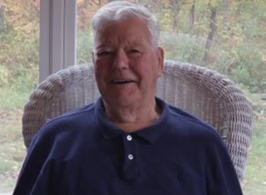 Please share a memory of John to include in a keepsake book for family and friends.
View Tribute Book
John (Walter) Lewis- passed away peacefully in the Aberdeen Hospital surrounded by family on January 4, 2021. He was born October 23, 1929, in New Glasgow, the son of Orrie and Geraldine( Dale) Lewis John worked for many years at Sobeys, but he spent his spare time with his family and friends. He was well known in the community for his infectious smile, jokes, and story telling. He warmed the hearts of many by acting as Santa Claus for over 65 years to bring joy to those around him. He loved dancing, singing in the choir, and four-wheeling with friends in the Garden of Eden. In addition to his parents, he was predeceased by his siblings Ken and Joyce and his beloved children Sandra and Scott. He is survived by his wife, Betty who he was married to for 68 years; siblings Joe and Loraina; son-and daughter-in-law, John and Darlene, grandchildren, Elizabeth (Justin), Michelle, Jack (Ashley), Katelyn, and 3 great-grandchildren, Max, Oakly, and Scott , son in -law Randy Wilson also several nieces and nephews A private funeral will be held at Angus's funeral home. Donations can be made to the Paraplegic Association. A wonderful Dad, not rich but proud, Merely one of the working crowd; Toiling , striving ,day by day, Facing whatever came his way. A smile for all, a heart of gold, One of the best the world could hold

Donations in his memory may be made to the Paraplegic Association. thespine.ca

Masks are mandatory, proof of vaccination and ID are required to attend the funeral service.