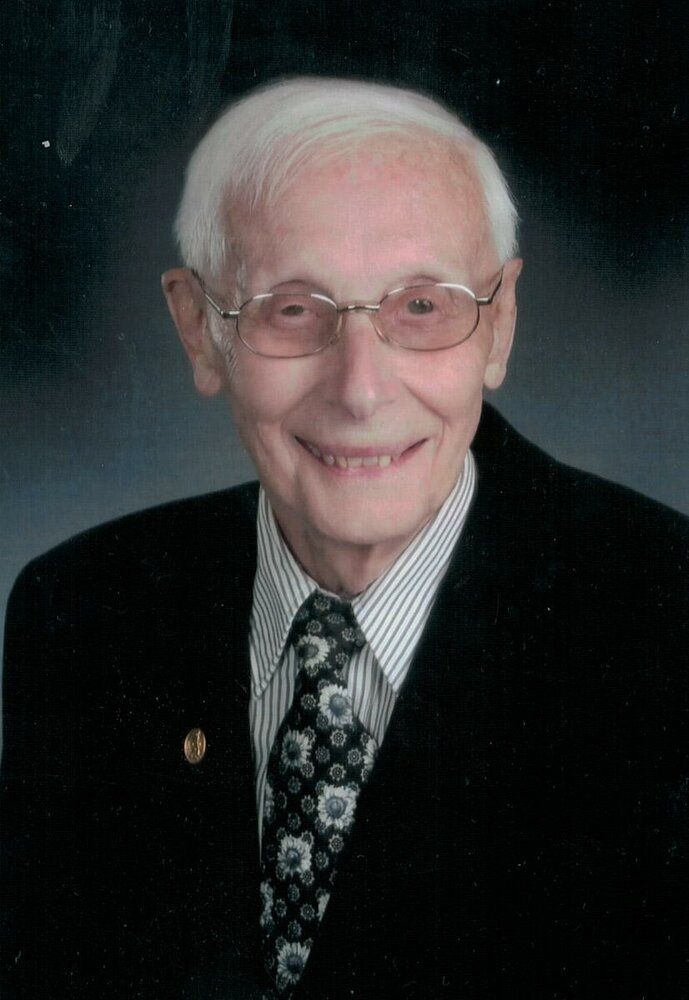 Please share a memory of George to include in a keepsake book for family and friends.
View Tribute Book
George Elliott Rae was a treasured member of his family, his community and his church. On November 28, 2021, at the age of 97, he passed away as he had lived; quietly, peacefully and with gratitude. Born in Meadowville, Pictou County, he was a son of the late William and Beatrice (Elliott) Rae. George was a resident of Stellarton since 1979, prior to which he had resided in Meadowville. He was a graduate of the Pictou Academy and the Provincial Normal College, Truro. George taught in various schools in Nova Scotia and for one year in Quebec. He was later employed with the former Miller’s Men’s Wear in New Glasgow from where he retired. Community was very important to George. He was an elder and faithful choir member of First Presbyterian Church. He was also a member of the Lyric Male Chorus and the Trinitarians. George strove to understand what was going on in the world and kept up with current events. He had a genuine interest in the lives of people, known and unknown. He will be lovingly remembered for his compassion, and kindness, his love of gardening, singing and visiting people, old and new friends alike. George was predeceased by his wife the former Janie MacQuarrie and sisters Elizabeth Roode, Janet Culgin, Helen Watt and Nancy MacKay. George is survived by a brother MacLellan Rae, Pictou and will be fondly remembered by his nieces and nephews. Visitation will be from 2-4 pm on Thursday, December 2, 2021 in the H.C. MacQuarrie Funeral Chapel, Stellarton. Funeral service will be held on Friday, December 3, 2021 at 11 am in First Presbyterian Church, Stellarton with Rev. Charles McPherson officiating. Burial will be in Bethel Cemetery, Scotsburn. George’s family want to express their gratitude to the Palliative Care Unit of the Aberdeen Hospital and the Prayer Shawl Ministry of the Pictou United Church for providing ease and comfort in his final days. George’s deep faith was a guiding force in his life and he believed in all forms of giving, donating his time, attention and money to a number of charities. In lieu of flowers donations can therefore be made in his name to the Canadian Bible Society or to a charity of your choice. It is the wish of his family that the memory of George lasts as a comfort to all who knew him. He will be missed. www.angusfuneralhomes.com Masks are mandatory and proof of vaccination is required to attend the visitation and funeral service.
Thursday
2
December

Donations may be made to the Canadian Bible Society or a charity of your choice.

Masks are mandatory and proof of vaccination is required to attend the visitation and funeral service.
Online Memory & Photo Sharing Event
Online Event
About this Event