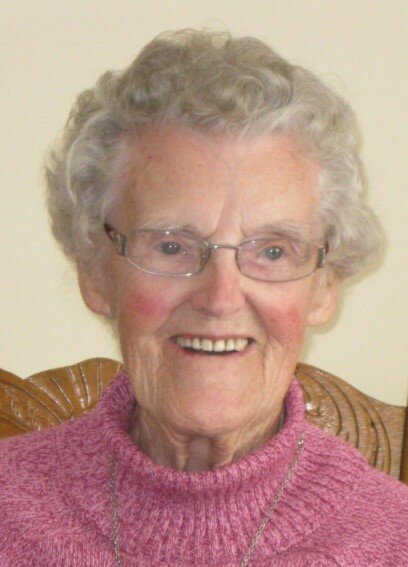 Please share a memory of Gertrude to include in a keepsake book for family and friends.
View Tribute Book
Jessie Gertrude MacDonald passed away on November 16, 2021 at the age of 104. Gertie was born on March 17, 1917 in McLellan's Mountain, Pictou County to John L. and Cora (Fulmore) MacDonald. This is where she spent her early years along with her brother Leslie, and sister Helen. After graduation from Normal College in Truro, Gertie taught in several one-room schoolhouses in Pictou and Antigonish counties. In January of 1940, she married Duncan MacDonald and settled in Sutherland's River where they raised their two sons. They were active members of the Presbyterian Church. Gertie sang in the choir and held the Church Treasurer position for many years. In the mid fifties, Gertie went back to teaching and took on the Commercial Class at East Pictou Rural High. She had many good memories of those years spent with the business class students. Family times were of utmost importance. Many home-cooked meals were enjoyed around the dining-room table, especially at Christmastime. Gertie took a great interest in what was going on in the lives of her children and grandchildren. Gertie and Duncan made several trips across Canada and toured Europe, Scotland, England, and Wales. In later years, winters were spent in Florida where she enjoyed fishing, golfing, reading, and bridge games. After Duncan passed away in 1997, she and Helen, also widowed, spent many winter months in Dunedin, Florida. Besides her parents and husband, Duncan, she was predeceased by a daughter in infancy , and by her brother Leslie. She is survived by sons Barry (Florence), Wade (Sheila), grandchildren: Scott (Diana), Brad (Cathy), Heather (Craig) Churchill, Colin (Brenda), Carla (Chris) Everill, eight great-grandchildren, sister Helen Ward, special friend Audrey MacGillivray, several nieces and nephews. The family would like to thank the staff of Haven Brook Manor where Gertie resided for the past three years, and Valley View Villa, where she spent the past month and Dr. Christopher Elliott, for their care and concern. Visitation will be held on Monday Nov 22nd from 2-4 and 6-8 P.M. in H. W. Angus Funeral Home, New Glasgow. Funeral service will be held on Tuesday at 1 P.M. from Sutherland's River Presbyterian Church with John Reeves officiating. Burial will take place in MacPherson's Mills Cemetery. Donations in memory of Gertie may be made to Sutherland's River Presbyterian Church or a charity of your choice. Masks and proof of vaccination and Gov ID are required to attend visitation and service.wwwangusfuneralhomes.com
Monday
22
November

Look inside to read what others have shared
Family and friends are coming together online to create a special keepsake. Every memory left on the online obituary will be automatically included in this book.
View Tribute Book
Share Your Memory of
Gertrude
Upload Your Memory View All Memories
Be the first to upload a memory!
Share A Memory
Send Flowers