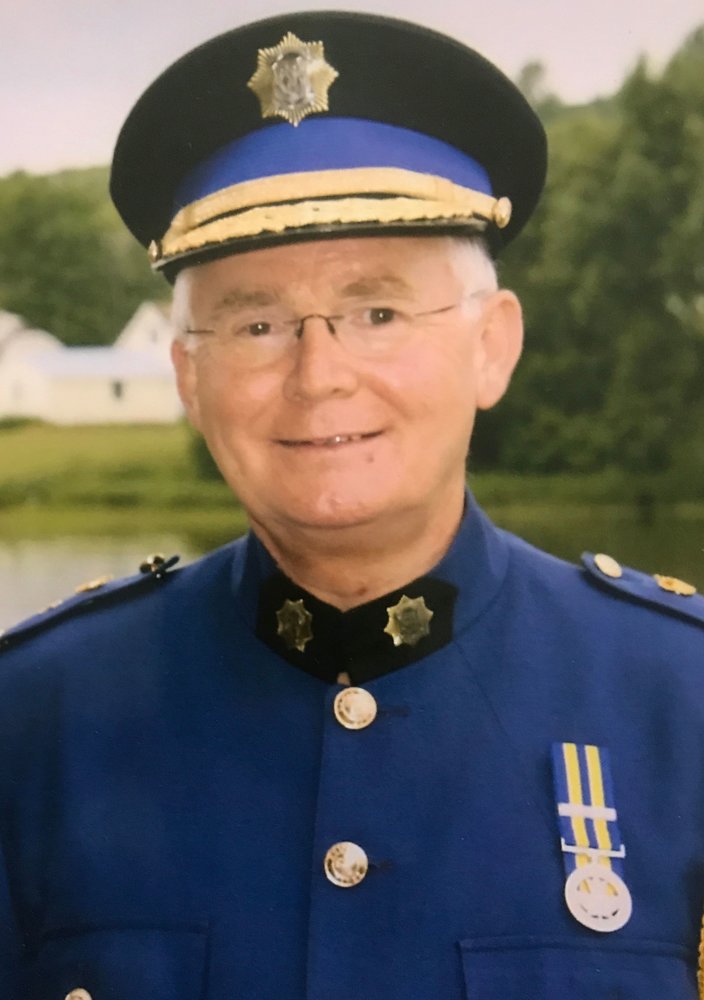 The Heighton Family is saddened to announce the passing of their father, husband, brother and son Ambrose “Amby” James Heighton on October 21, 2019 at the age of 69.

Amby was born in Stellarton on November 9, 1949 to the late Ambrose T. Heighton and Marion (MacDonald) Heighton of Glen Haven Manor. Amby spent the entirety of his adult life serving the citizens of Stellarton as a member of the Stellarton Police Force. In his 44 years with the Force he held several ranks up to and including Chief of Police. He joined the Stellarton Police Force at the age of 24 as a Constable. He was promoted to Corporal in1979 and then to Sergeant in May, 1982. After seventeen years of serving the town as Sergeant and obtaining several certificates and training designations Amby was promoted to Chief of Police on April 1st, 1999 following the retirement of his good friend and colleague, Whitt Whytewood. Amby continued to serve the Town of Stellarton and its citizens until he retired in 2017.

Policing was Amby’s passion. He was extremely proud of his community and his service to the Town of Stellarton. Throughout his career, he could often be found on Foord Street making residents feel safe and welcoming visitors to the town. He was, definitely, a police officer from the “good old days”, always making himself available to listen to concerns and willing to lend a helping hand to family, friends and the citizens in need. Since his retirement, he thoroughly enjoyed talking about his policing career and telling stories about days gone by to anyone who would listen.

Amby was also a valued contributor to his community through the Mothers Against Drunk Driving (MADD), Boy Scouts Canada, Lion’s Club, Crime Stoppers, the D.A.R.E program and coaching numerous youth sports programs. He was always an advocate for youth through his support of school programming and his efforts to maintain facilities in the Town. He was most proud of his family and enjoyed watching his children and grandchildren grow up to find success in both careers and activities.

He will be greatly missed by his Grandchildren and Best Friends, Keigan, Jaelyn, Ambrose, Dominic, Ava, Pineau and Montgomery Heighton.

Visitation will take place on Friday, October 25th from 2-4 and 7-9 pm at the H.C. MacQuarrie Funeral Chapel in Stellarton. Funeral service will be held at 11am on Saturday at Our Lady of Lourdes Roman Catholic Church, Stellarton (Lourdes) with Father Barrett Clare-Johnson officiating.  A family Burial will take place at a future date.

Donations in his memory may be made to Nova Scotia Crime Stoppers,  Mother’s Against Drunk Driving (MADD) Pictou County or a charity of choice.

To send flowers to the family or plant a tree in memory of Ambrose Heighton , please visit Tribute Store
Friday
25
October

Burial will be held at a later date.

Donations may be made to Big Sisters Pictou County, Crime Stoppers Nova Scotia, or a charity of choice.
Share Your Memory of
Ambrose
Upload Your Memory View All Memories
Be the first to upload a memory!
Share A Memory
Send Flowers