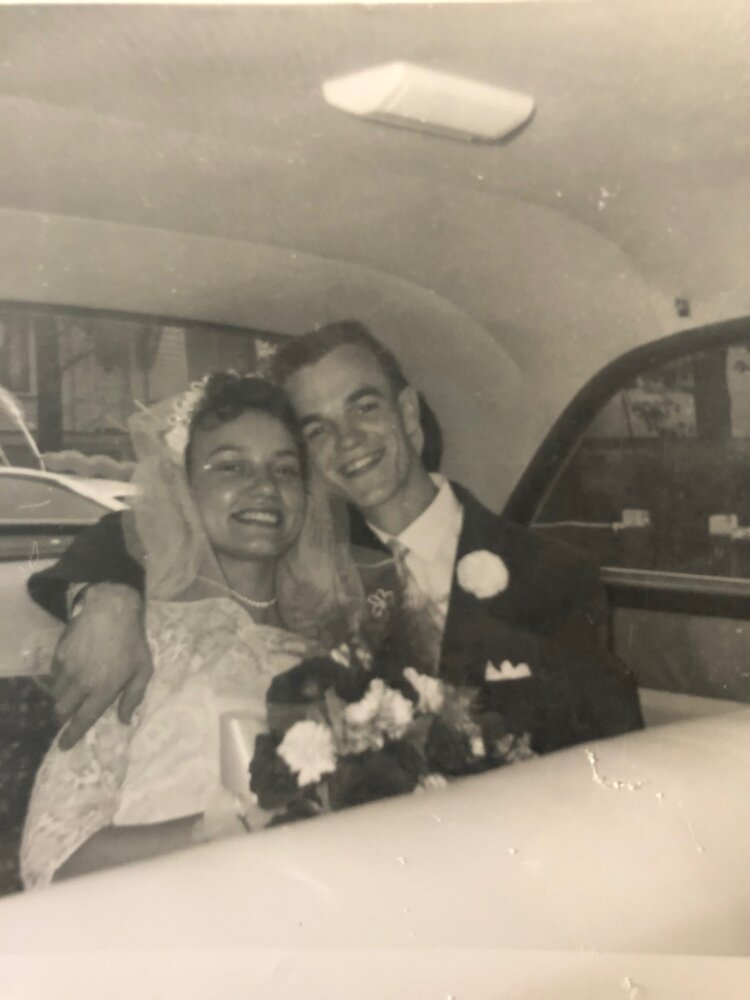 Please share a memory of Joan to include in a keepsake book for family and friends.
View Tribute Book
The family of the late (Violet) Joan (Lucy) (Tavener) MacDonald announces her death Dec. 5th, 2022 following a years-long set of life losses due to dementia. Born January 24, 1942 in Corner Brook to parents Michelle and Peter Tavener, she moved with her family to Sydney NS where she met and at age 19, married the love of her life, Darryll MacDonald from Glace Bay. Due to his work, he then moved Joan across hell and half acre, every 1-2 years while they had their 4 children. Moving was extremely difficult for her, due to her being brash yet shy and thus feeling isolated in new towns. Joan was a unique individual, strong of mind, sharp of tongue and wit, and who had (as Darryll would say) “no gray areas”. She either liked something or someone, or more often, detested it/them. She was a study in contradictions, making her often impossible to know for those not within the family, and impossible not to love/admire for those of us within her family she loved so much. She was both social when younger and when interested in a good party or those fun times that would randomly align to create what she could call “a happening”, and yet her natural state was antisocial, hiding from knocks on the door or cars in the driveway with her signature “stop, drop and roll (behind the couch) that she taught us all to perform in unison at a very young age, and her disdainful dismissal of uninvited calls (“you really never HAVE to answer your phone, you know”). She thought humans were fairly uniformly disappointing as a group, but if she saw something amazing or kind or engaging in someone, she would celebrate and admire it openly. She carried anxieties earned in childhood, through her adult years, manifesting it in ways that we as her children had no idea weren’t everyone’s norm. Claustrophobic, she would almost claw us to death if we dared close a door in an unfamiliar room, bathroom or lobby we stood in with her. Elevator-phobic, she more than once unconsciously slapped the hand of a stranger (adults or children) who got in and pushed the elevator buttons in a multiple or sketchy manner, causing us to have to linger after her exit to apologize profusely to the startled person/parent. Yet in the times/situations where her anxiety could rightly and vigorously be applied (when our plane caught fire/had to do an emergency landing, when two of her children, as young adults, had to battle cancer), she was freakishly strong and brave. She adored music, especially singing with her husband and children at the end of each day as we did the dishes, she could play piano yet just wouldn’t, and she owned no albums. She also loved our humor, and was hilarious herself, but always unintentionally and very dryly. She was a stickler for rules, except when she had a few glasses of wine and lost her ability to fight the naughty side. She was extremely well-read and spoke with the diction and bearing of a university professor, but her comments were profane and filthy. She would come out with the most unique comments (“sharing those water bottles is going to give those hockey players meningitis”, and the ever-present “Cover your lungs!”) that ended up being true years later, only fuelling her smugness at being correct. She raised us to study hard & pay our own way, especially her daughters as she outlined men could not be trusted and should never be relied upon. She professed to only love her children and their spouses/children yet despite warning she would never love “those steppies”, she adored her step-grandchildren and new additions to the family just as much. She also declared a lifelong detest of animals especially pets, yet could be caught secretly sweetly talking to/petting the various dogs, cats, budgie and particularly one berserk kitten whom she admired for running wildly across her paper each day as she read it or attempted her beloved “cryptoquotes”. She started work at age 14 at the Diana Sweets in Sydney, then as a young mother worked a telephone operator on one of those weird plug in things, then at a TV station, a newspaper office, accounting firm, finally working for years at what was then “Scott Paper”, until her retirement. She was predeceased by her beloved parents and husband, and a brother Guy in infancy, & niece Beth MacLean. She is survived by her children Dara Lee MacDonald (Gerard), Duana d’Entremont (Francois), Shauna Potter (Dave), & Duane MacDonald (Rhonda), and the “gaggle” of grandchildren/” steppies”- Mike Wheatley (Alicia), Kayla Knight (Eddie), Ian Wheatley (Melissa), Kerry MacDonald, Sienna Potter (Alex Moore), Breton Potter, Aaron, Jacob & Gregory MacDonald, Kristen d’Entremont, Morgan d’Entremont, and various funny-looking great-grandchildren. She is also survived by her sister Karen MacLean (Benjamin), niece Leeanna McNeill (Chris) & nephew Peter. There is no memorial service by fervent command of our mother. Donations in Joan’s memory can be made to IWK Hospital. To all who loved our mother, thank you.

Donations in memory of Joan may be made to the IWK Hospital.
Online Memory & Photo Sharing Event
Online Event
About this Event

Look inside to read what others have shared
Family and friends are coming together online to create a special keepsake. Every memory left on the online obituary will be automatically included in this book.
View Tribute Book
Share Your Memory of
Joan
Upload Your Memory View All Memories
Be the first to upload a memory!
Share A Memory
Send Flowers