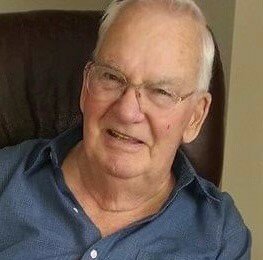 Please share a memory of John to include in a keepsake book for family and friends.
View Tribute Book
Brown, John William “Jack”- It is with profound sadness that we announce the death of our beloved husband, father, grandfather and great-grandfather John William “Jack” Brown of Munroe Avenue Extension formerly of Hopewell who passed away peacefully at the Shiretown Nursing Home, Pictou on November 17, 2022. Jack was born June 21, 1935 in East Chester, Lunenburg County, having been raised in Eureka, Pictou County from the age of 10. He was a son of the late Charles Elmer and Pauline Laylia (Murphy) Brown He was employed at Scott Maritimes/Kimberley Clarke Pulp and Paper mill from 1966-1993 as a pipefitter. Prior to 1966 he worked odd jobs, the longest being with Allan Sutherland’s Plumbing and Heating. New Glasgow. Jack was dedicated to his family always putting their needs first. He had an outstanding work ethic, only settling for perfection which showed in his yard work and immaculate horse stalls. How many can say their horses were house trained! Jack loved his Quarter horses, a passion he shared with his daughter Paula, with his son Greg, he shared the love of the outdoors, fishing, hunting and the odd time getting lost, but that’s a story for another time. his daughter Heather was his “back up memory”. They would sit for hours playing the “do you remember” game and reminiscing. With his wife, Lorraine, many summers were spent travelling to Auctions to many destinations in Nova Scotia, especially his beloved South Shore, always happier with a grandchild or 3 in tow. He had a dry sense of humour and a loud infectious laugh, laughing with his whole face, especially at his own jokes. Jack is survived by his wife of 65 years, Lorraine(Hand), his 3 children; Heather(David), Manitoba; Greg(Donna), Munroe Avenue Extension, Paula(Craig), Meadowville. Although his dream for an all “Brown Girls” softball team came up 2 short, he could not be more proud of his 7 beautiful granddaughters Jennifer(Jofe), Amy, Amanda(Ryan), Morgan(Stephen), Sydney, Emaleigh, Graicen and 4 wonderful great-grandchildren, Charlie, Hannah, Harper and Rhys. He is also survived by his brother Charles(Eckie)Brown, Trenton; as well as nieces and nephews. The family would like to thank the Shiretown Nursing Home in Pictou for their compassion and support. Cremation has taken place. No visitation by request of the deceased Donations may be made to the Alzheimer’s Society of Nova Scotia or to a charity of one’s choice. Be talkin’ at ya! angusfuneralhomes.com
Online Memory & Photo Sharing Event
Online Event
About this Event