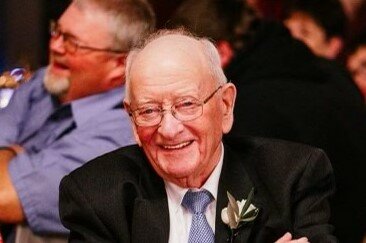 Please share a memory of George to include in a keepsake book for family and friends.
View Tribute Book
George Frederick MacDonald (George F.) passed away peacefully at the Aberdeen Hospital Palliative Care June 11, 2022 with his family by his side. Born December 2, 1928 in Rocky Mountain to Neil and Tressia (Clyburne) MacDonald, he was very proud to say he was born, raised and lived all his life in Rocky Mountain. In 1946 he married the love of his life Elsie Archibald and together they raised a family of fourteen children and celebrated many milestones together. In his early years he worked alongside his best friends John Wood and Raymond MacKay. In 1967 he decided to go out on his own and formed his own company George F. MacDonald & Sons Bulldozing & Trucking, where he remained active and was included in making decisions with his sons for 55 years until his death. Although he enjoyed and was proud of the work his company did, his most prized possession was his family and had many pictures to prove it. He was a proud member of the Gladstone Orange Lodge, founding and lifelong member of the East River St. Mary's Fire Department, proud member of Bethany United Church and a lifelong member of the PC Party. He is Survived by his children Doug(Brenda) and Tara, Jennifer, Letitia, Trevor; Isabel (Glen) Tate and Krista, Karla, Stephen; Joanne (Danny) Clifton and Gina, Jonathan, Brian, Justin; Melvin and Wade; Wayne; Robert (Lena) and Darrick; Marie and Tyler, Zackary; Kevin (Judy) and Amy, Daniel, Emma; Kathy (Allister) MacDonald and Spencer, Riley; Allan and Denica: Sheldon (Lisa) and Connor; Cheryl and Chelsie; daughter in-law Michelle and Katie, Brittany; 34 great grandchildren with the 35th arriving in the coming weeks; loving sisters Thresa Fraser, Shirley (Keith) Cruickshank, Sister In-law Edna Fraser. He was predeceased by his wife Elsie in 2011, sons Ralph and Dale, daughters In-law Mary-Lou and Phyllis; brothers Daniel (Bud), William (Bill), Robert (Bob), sisters Helen Hillier, Mae MacDonald and Ann Henderson. The family would like to extend their sincere thanks to Bernadine Thorne, Shari Fiander and Debbie Archibald who helped us, allow Dad to stay in Rocky Mountain watching over the equipment and garage. They would also like to thank, VON Pictou County; Dr. Gregor MacLean; emergency, 4th floor and palliative departments of the Aberdeen Hospital; Ron and staff at Shoppers Drug Mart; Rev Derek Elsworth and H. W. Angus Funeral Home. His remains will rest in the H.W Angus Funeral Home, New Glasgow from 1-4 and 6-9 pm Wednesday. Funeral service will be held 2 pm Thursday in Zion Presbyterian, East River St Mary's with Rev Derek Elsworth officiating. Burial will be in Valley View Cemetery, East River St. Mary's. Family flowers only. Donations in memory of George F. may be made to the Bethany United Church C/O Judy MacLennan 54 MacMillian Road Willowdale B2H 5C8 or Valley View Cemetery C/O Angie Jack 111 Black Brook Road East River St. Mary`s B2H 5C8. The family requests masks be worn to both Visitation and Funeral.
Wednesday
15
June

Masks MUST be worn during the VISITATION and FUNERAL SERVICE.
Online Memory & Photo Sharing Event
Online Event
About this Event