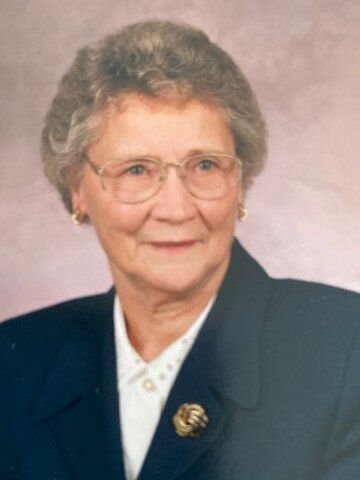 Please share a memory of Marion to include in a keepsake book for family and friends.
View Tribute Book
Cummings, Marion Luella- It is with profound sadness we announce the peaceful passing of Marion Luella Cummings 97, of New Glasgow on Tuesday March 1, 2022 at the Aberdeen Hospital, New Glasgow. Born in Stellarton on June 5, 1924 Marion was a daughter of the late Mary(Mae)Cornett and Frank Whytewood. She was predeceased by her husband Dorman Edgar Cummings, a sister Isabel in infancy, a brother Franklin in infancy, sisters, Bertha Howard, Verna Walsh, brothers-in-law Robert Howard, James MacKenzie and Clifford Lowe, son-in-law Gordon Maclean. Marion is survived by her sisters Gladys MacKenzie and Isabel Lowe, daughters Norma Thompson(Chester), Mary Maclean and Miranda Morrison, grandchildren Yvonne Francis(Eugene), Nancy Maclean, Rachael and Alexandra Morrison, great-grandchildren Austin and Savannah Francis. Marion was a life-long resident of Stellarton until 10 years ago. She was a member of the Christ Anglican Church, Stellarton and a past member of the Altar Guild and Anglican Church Women. She was also a member of the Ladies Auxiliary of the Royal Canadian Legion Branch 28 Stellarton. Marion was past Mistress of Acadia Sisters #609 Westville, an honorary member of the Most Worshipable Grand Lodge of Canada(80 year pin) and Crystal Chapter #66 of Westville. Marion worked during WWII at the Pictou Shipyard. She was also employed at the Aberdeen Hospital and the Canadian Envelope Factory until its closure. Marion was an avid Blue Jays fan spending many years cheering and could recite and stats regarding players and team. She spent most summers at the family cottage at Lochaber Lake. She was deeply loved by her family and will be missed dearly by all who knew her. Due to Covid 19 protocols, a private family visitation and funeral by invitation only will be held. Burial will take place in the Christ Anglican Church Cemetery at a later date. Donations in memory of Marion can be made to the Nova Scotia Heart and Stroke Foundation, the Nova Scotia Lung Association or to the Christ Anglican Church in Stellarton. angusfuneralhomes.com
Online Memory & Photo Sharing Event
Online Event
About this Event

Look inside to read what others have shared
Family and friends are coming together online to create a special keepsake. Every memory left on the online obituary will be automatically included in this book.
View Tribute Book
Share Your Memory of
Marion
Upload Your Memory View All Memories
Be the first to upload a memory!
Share A Memory
Send Flowers