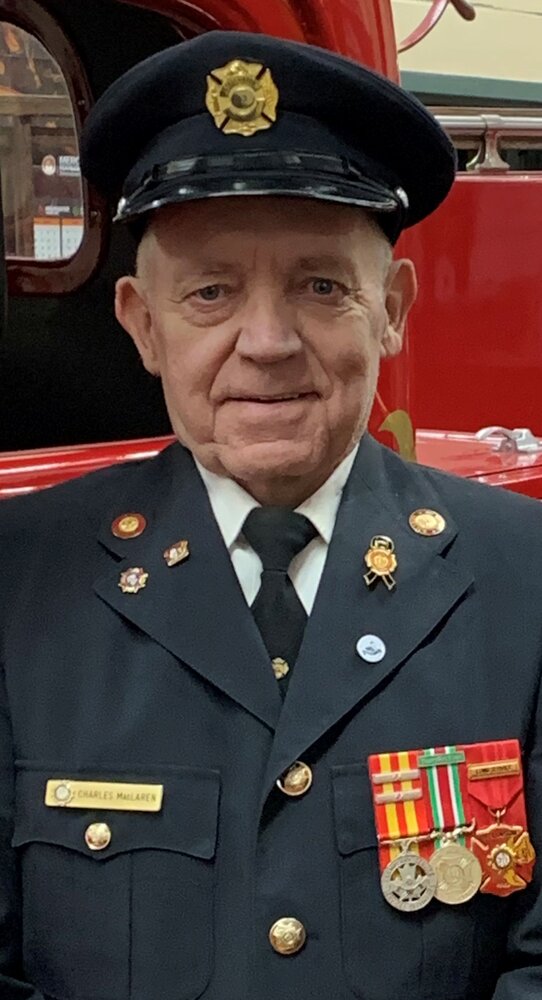 Please share a memory of Charles to include in a keepsake book for family and friends.
View Tribute Book
It’s with deep sadness that we announce the passing of our father and papa on January 14 ,2022 in the Palliative Care unit at the Aberdeen Hospital. Dad was born December 5, 1949 to the late George MacLaren and the late Eva (Dignan) Jack. Raised by his grandparents the late Lester and Harriet Dignan. Dad was a resident of Stellarton all his life. He was employed by Michelin Tire until his retirement but Dads greatest passion was being a member of the Stellarton Fire Dept for 51 years before his illness took him away from that. Dad is survived by his children Annette( Kevin MacKenzie) Eglington PEI and Anthony( Rochelle) middle Sackville. His former wife and friend Sheila (Cyr)MacLaren. His biggest pride and joys were his grandchildren Brianna, Ethan, Gisele and Ella. Chosen grandchildren Kenli Ross and Jeffrey Quinn. Brother George(Brenda), sister Janette Campbell, brother Alex MacDonald(Deb), Bill ( Jennifer) Jack. Chosen sister and friend Janice MacLaughin. Numerous Nieces and nephews and countless friends he held dear to his heart. Predeceased by his parents and grandparents and by step father Bill Jack Sr. A celebration of life will be held at a later date. Arrangements are under the direction of the H.C. MacQuarrie Funeral Chapel, Stellarton. We would like to send our dearest thank you to the VON staff for their utmost care they shown to Dad the last couple months, to the EHS guys and girls for their amazing care. Also, Dr Anne Kawsnik, Debbie Williams and the amazing nursing staff in the palliative care unit for their amazing care for Dad! Donations may be made in memory of Dad to the Stellarton fire dept or the Palliative Care society. www.angusfuneralhomes.com

Donations in memory of Charles may be made to the Stellarton fire Department or the Aberdeen Palliative Care Society.
Online Memory & Photo Sharing Event
Online Event
About this Event

Look inside to read what others have shared
Family and friends are coming together online to create a special keepsake. Every memory left on the online obituary will be automatically included in this book.
View Tribute Book
Share Your Memory of
Charles
Upload Your Memory View All Memories
Be the first to upload a memory!
Share A Memory
Send Flowers