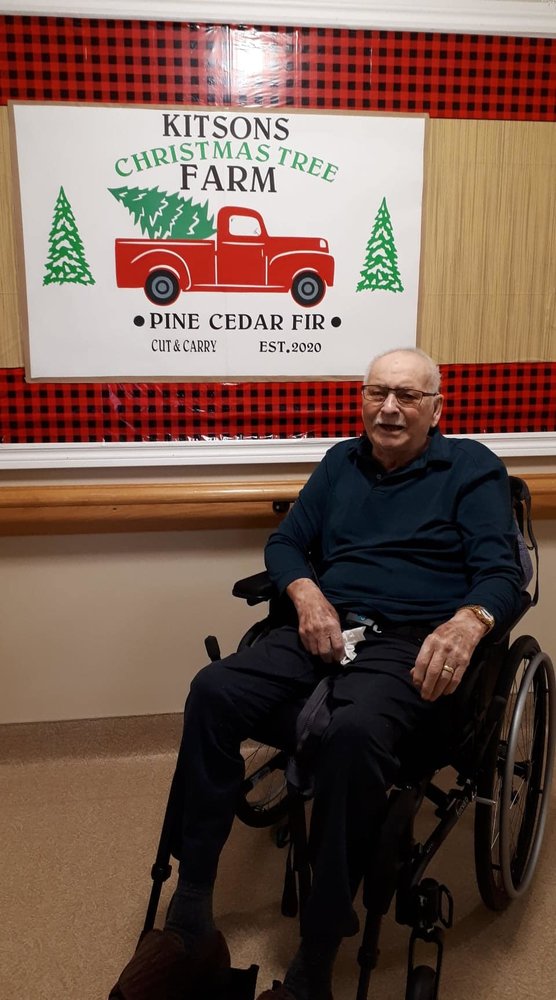 Please share a memory of Irving to include in a keepsake book for family and friends.
View Tribute Book
Irving Granville Kitson 1932-2021 Irving (dad) age 88, of Stellarton / SaltSprings passed away May 13th 2021 at Willow Lodge, Tatamagouche after a long, courageous battle with illness. Born in Stellarton, Irving was the youngest son of Thomas and Bertha (Heighton). Orphaned at the age of 10, he left school to support himself, turning his hands to many jobs and beginning his solo journey of survival and self-education. His work life started as a farm labourer, then as a call boy at the CNR Round House in Stellarton. He watched and learned. He was proud to become the youngest Boiler Maker at the CNR, where he was given the nickname of Slippery by his coworkers because he had the ability to be in many places doing many jobs. As a young boy, he helped a neighbour make windows. This was his introduction to working with wood. Mom was his strongest supporter and cheerleader. Through her never-ending encouragement Dad gained the confidence to apply his giftedness. Due to his amazing ability, deep curiosity and strong work ethic he mastered many jobs. A traveling salesman for MacLean, Johnson and Williams, Supervisor of Equipment and Repair (Millwright) at Clairtone and the last employee tasked with the dismantling the Clairtone factory, Supervisor of Equipment and Repair at Electrohome and dismantling this factory, Woodworking instructor and manager of R.A.M.P and go-to- man for all neighbours who needed help, dad wore many hats. Our phone would often ring when people had a plumbing or home emergency. This continued throughout his life, challenges were met and faced. Dad often said, “ I go to bed with a problem and in the morning I have the solution.” His lifelong passion was always wood working. As a self-taught carpenter his reputation precedes him. With a love for the smell of wood, his creativity and flair for design he crafted fine furniture in his woodworking shop. Many are lucky to have pieces of his perfectionist craftsmanship in their homes and businesses in Nova Scotia. As a boy he had a family dog, Buck, he often spoke of. Thereafter, there would always be a pet to love: Mike, TB, Shauna and Maggie May were added to his family over the years. This love of animals was constant and something both Mom and Dad shared. The family dog and the stray cats that seemed to find their way to their door in SaltSprings were cared for and loved. Even a white feathered crow that they named Joe became a regular visitor. Dad felt a devotion to animals and never hesitated to care for them. If you knew dad you may have tasted some of his quick wit and humour, he reveled in repeating sentences spoken by his young grandchildren, " What tolour is your dog? "No grampy YOU get in the back." Irving (dad) is survived by his son Terry (Stellarton), daughters Arlene a.k.a. Lanie (David) Robinson, Halifax, and Robin (Mike), Hammonds Plains; his grandchildren Connor (Jenny), Ottawa, Kate (Mike), Halifax, Michael (New Glasgow), Donny (Agata), Poland and his great-grandchildren: Elliot, Nora and Arlo. He was predeceased by our loving mother, Lois (Feltmate) his devoted wife of 68 years and by his siblings, Laura, Lillian, Tom, George, Clarence, Johnny, Dorothy and Jean. We’d like to extend our sincere gratitude and thanks to the amazing staff at Willow Lodge for their compassionate care. Dad often voiced his appreciation for all the help and attention given to him. As his children, we would like to give a very heartfelt thank you for the exemplary care and support you have provided. Appreciation is also extended to the VON nurses and caregivers who dutifully cared for dad, allowing him to remain in his home before LTC. We are eternally grateful. Special thanks to his loyal and faithful friends who never forgot their bond with dad: Darryl, Donnie, Everett, Helen, Rhea, Jim &Julie, Cherry, Grant & Donna, Gordie & Darlene and KayKay. Thank You. Memorial donations can be made to the Willow Lodge to fund a Palliative Care Room or the Pictou County S.P.C.A. Cremation has taken place. According to Dad’s wishes and due to the current Covid 19 restrictions there will be no funeral or visitations at this time. However, there will be a Celebration of Life at a later date. angusfuneralhomes.com
Online Memory & Photo Sharing Event
Online Event
About this Event

Look inside to read what others have shared
Family and friends are coming together online to create a special keepsake. Every memory left on the online obituary will be automatically included in this book.
View Tribute Book
Share Your Memory of
Irving
Upload Your Memory View All Memories
Be the first to upload a memory!
Share A Memory
Send Flowers