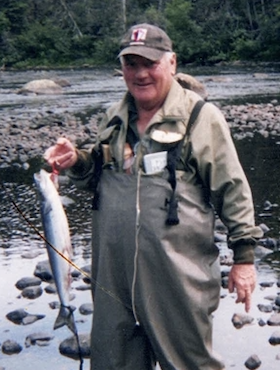 Please share a memory of Fraser to include in a keepsake book for family and friends.
View Tribute Book
It is with heavy hearts we announce the passing of our beloved husband, father, grandfather, and great- grandfather. Fraser Clarence Jenkins, 79, of MacLellan’s Brook died peacefully on Saturday, April 10, 2021 surrounded by loved ones. Born in New Glasgow, he was the son of the late Ephraim and Agnes (Tanner) Jenkins of MacLellan’s Brook. He began working with his father at a young age, learning the ropes of becoming a butcher and businessman. He later branched out to become a hide dealer for 40+ years, travelling to New Brunswick, Prince Edward Island, and Newfoundland making many lifelong friendships along the way. With his nephew, Glen, he purchased the Homestretch Meat Market from his brother, Stranburg, in the late 1970s. They continued to expand the business, purchasing a store and an abattoir in River John. They later opened the F & G Meat Market in Truro. Fraser continued his travels to Newfoundland, purchasing salmon and selling to customers in the Maritimes until the commercial fishing of salmon ended. As a young boy, Fraser was a member of the Cadets. As an adult, he became a member of the Stellarton Legion where he enjoyed sharing a beer, chatting with friends, and dancing up a storm. Fraser enjoyed hunting and fishing, giving most of his catches to friends and family. He was a generous man, the first to lend a hand. He adored children and was affectionately known as “Uncle Bear” to generations of his many nieces, nephews, and neighbourhood children. His grandchildren were his greatest joy in life. He loved to talk about all their accomplishments and enjoyed spending time with them and talking on the telephone. Fraser will be missed, but not forgotten. His stories, jokes, and his favorite word “Imagine” will live with us forever. Surviving are his loving wife: Donna (Turnbull), His children: Glenda (Greg) Bailey (Grande Prairie), Gloria (Kenny) Stewart (Merigomish), Alfred (Ronda) Jenkins (Grande Prairie), Grandchildren: Kristal (Lauchlin) Cameron, Angela Stewart, Hannah Jenkins, Caleb (Mya) Jenkins, Nicholas Bailey, Great- Grandchildren: Milo Jenkins, Brother: Gordon Jenkins (MacLellan’s Brook), Sister: Cheryl Jenkins (Stellarton), and numerous nieces and nephews. He was predeceased by his brothers: Stran, Roy, Walter, George, Fred, Norman and sisters: Belle, Katherine, Carol, Helen. Due to Covid 9 restrictions a private family service will be held and a celebration of life will be held at a later date .
Online Memory & Photo Sharing Event
Online Event
About this Event

Look inside to read what others have shared
Family and friends are coming together online to create a special keepsake. Every memory left on the online obituary will be automatically included in this book.
View Tribute Book
Share Your Memory of
Fraser
Upload Your Memory View All Memories
Be the first to upload a memory!
Share A Memory
Send Flowers