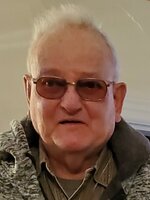 Stellarton; Carl Ronald Skidmore age 81 passed away on Tuesday May 17th, 2022 in the Aberdeen Hospital, New Glasgow. Born in New Glasgow he was a son of the late Verne and Nora (Antle) Skidmore. Carl spent his early years in Thorburn, after graduation from High School he went on to Teachers College in Truro. He taught in various schools including Parrsboro and in Quebec. He then continued his education at Acadia University until 1965, after which he taught at Pictou Academy for 3 years and then to Espanola, Ont for 2 years. Returning to Stellarton where he taught until 1991. Carl coached basketball in Stellarton from 1973 – 1984, he was an International Amateur Official and obtained his level 3 coaching certificate. He was an AC class scuba diver. Carl also studied at ST.F.X from where he received his Masters in English. For a time he was on the board of the local YMCA and a pioneer for life Guard Service at public beaches. He was a member of First Presbyterian Church, Stellarton and had been Sunday School Superintendent and teacher, having also taught Young Peoples. Surviving are a sister, Eileen Costey ,a brother Art Skidmore ,nephews Greg (Sherry) Skidmore , Mark and Jason Skidmore He was predeceased by a brother Thornton “Sonny” Skidmore and sister Joan Armstrong . Cremation will take place, there will be no service by request, burial will take place in the Brookside Cemetery. Donations in memory of Carl may be made to the East Pictou Educational Foundation. Online condolences may be made on our website at angusfuneralholms.com