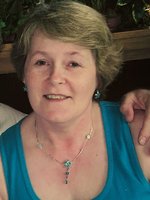 Zena Mary Vincent (Cameron) age 65 of Valley View Villa formaly of Abercrombie passed away peacefully June 24th ,2021 in Valley View Villa with her loving family by her side after a courageous battle with dementia. Born August 26th 1955, in Jersey, the Channel Islands, she was the daughter of the late James Campbell(Cammie) and Daphne Cameron(Hunt) Zena, along with her mother and her uncle moved to Canada in 1957 and resided in the Garden of Eden before moving to Stellarton in 1969. Zena was married to her loving husband Robert(Bob) and gave birth to her one and only daughter, Stephanie. Zena had an amazing work ethic. Working at Tim Horton’s for 37 years, and creating relationships with many customers- it was very rare that you would catch Zena missing a day of work. Survived by her loving husband Robert and daughter Stephanie (Abercrombie) as well as sisters; Claire (Forbes Pushie) and Gail Cameron. Uncle Dennis( Karen) Hunt, Texas Brothers and sisters in-law; George and Katherine Vincent, Cyril Vincent, Bonnie and Douglas Pitts, Judy and Brian Richard, Ernest and Evelyn Murray As well as many nieces and nephews. Zena was predeceased by her parents Cammie and Daphne hunt as well as her in laws David and Beulah Vincent. Cremation has taken place. Service will be held at H W Angus Funeral Home Tuesday June29th with burial in the Valley View Cemetery, East River St Mary’s Family flowers only please. Donations in Zena’s memory may be made to the Alzheimer’s society or a charity of one’s choice. The family would like the thank the staff of valley view villa for talking such good care of Zena while she was under their care.