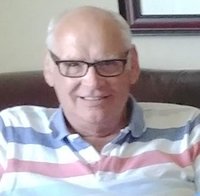 Robert Graham “Bobby” Brine (72), of Pictou Landing NS passed away peacefully on Feb 14, 2021 in Aberdeen Hospital Palliative Care Unit in New Glasgow, NS after a decades long battle with heart disease. Born in Pictou on March 30, 1948, he attended West Side elementary school and New Glasgow High school and then went on to own and operate a hair salon in New Glasgow for 40 yrs. Mister Roberts Salon on Abercrombie Road became ‘the’ spot in the county for all the local gossip, good and bad. So many naughty secrets, sins and sorrows were shared in the chairs of the infamous salon, he once told clients with a chuckle, he was going to write a book called Split Ends, which sent blood pressures soaring throughout Pictou County. A highly opinionated contrarian with a gregarious personality and an infectious laugh, Bobby was loved by so many lifelong friends and clients, too many to mention… (you know who you are). His closest and most loyal friends, Gayle and John Sobey, Jean and Don Murray and Eric Arbuckle of New Glasgow supported him through thick and thin for decades throughout his lengthy debilitating disease. He is predeceased by his father, H. Kenneth Brine of Antigonish, his mother Janet Agnes MacDonald of Doctors Brook and his twin sister Kathleen who passed away two days after her birth. He is survived by his brother Douglas ‘Douggie’ Brine (Stellarton), his nephews Kenneth, David and niece Susan; and numerous cousins he loved to visit in Doctor’s Brook, Ardness and New Glasgow. He deeply appreciated the special prayers he received from the Sisters of Saint Martha and the kind care from the excellent doctors and nurses in the Aberdeen Palliative Care Unit. Funeral arrangements are being handled by HW Angus Funeral home. Donations may be made to the Aberdeen Hospital Palliative Care Society.