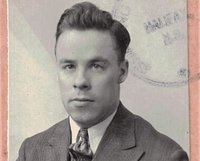 Reid, John Robert(Veteran)- 100 years of age- John was born December 31st 1920, to parents James and Bertha Reid. He resided in Hillside, and New Glasgow until June of 2020 when he became a resident of The Northumberland Veterans Unit Pictou. John passed away peacefully, on January 17, 2021 in the unit. John served as a Merchant Marine and returned to operate Reid’s Grocery store in Trenton and later, owner/ operator of Reid’s Bus Service for 25 years. He was a member of the First United Church, Trenton. John was predeceased by his first wife Evelyn, his sister Ada Hoskins and her husband Jack, also Stepchildren Gloria Jean Borowski and Raymond Mackinnon. John is survived by wife Jean, New Glasgow. Cremation has taken place. As per John’s request there will be no visitation or funeral service. Burial will take place in the Hillside Cemetery, Trenton at a later date. Donations if desired in memory of John may be made to a charity of one’s choice. angusfuneralhomes.com